I took a long break before I got back to the back bedroom rehab this weekend. In between posts, my new actual smartphone arrived so I took pictures with it. These were taken after cleaning everything off the ceiling and vacuuming the debris off the floor but before taking off the wall sheet rock. So you can see why I put the paneling up in the first place. 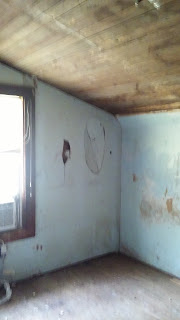 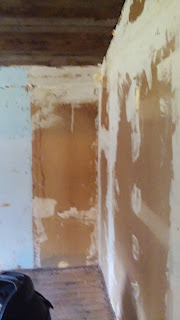 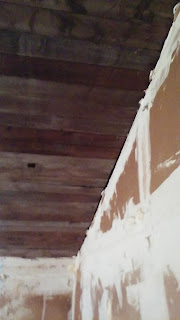 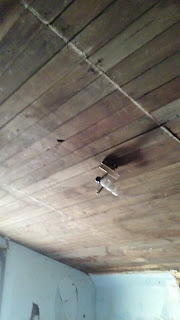 Here's some shots of the termite damage I found on the ceiling. 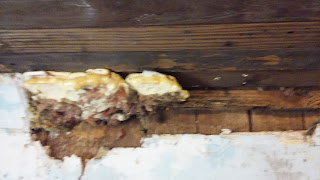 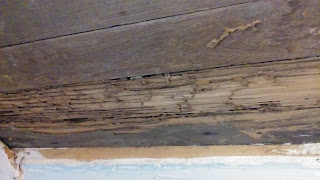 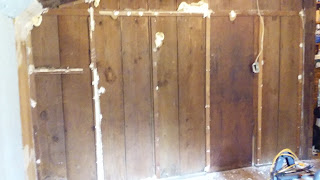 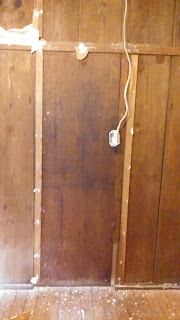 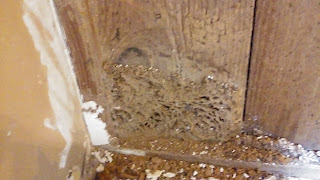 Moved onto the back wall and that's where the termites had a subdivision. According to my parents, my great-grandmother had an issue with termites when she lived in my house that was treated and never had another issue. She died when I was eleven, so this damage is decades old. Luckily, the termites didn't want to eat the pine boards so yeah, I don't have to rebuild stuff holding up the roof. But they did eat off the paper-backing of the sheet rock, so the only thing holding this stuff together was the paint. It crumbles as soon as I pull it down. 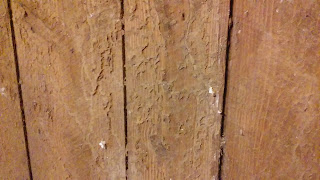 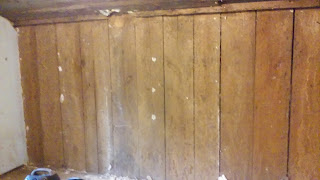 I yanked out the spray foam repair I had made because a squirrel was pulling out all the insulation and found they had a back door into the room. I blocked it with cardboard for now until I can buy some wood to patch it properly. 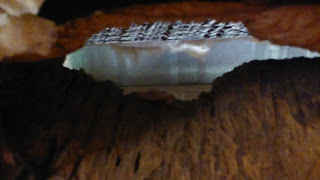 Once I cleaned the back wall of sheet rock and termite dirt, I realized that I had planned to put my sewing machine against this one when I move back in. There's no electricity there. The only outlets in the room are the one under the window and one someone put in the light fixture. If you can tell from the photo, it looks like the fixture should hold three bulbs but only has two. The third prong ends in an outlet; never seen that before. I'd rather not have multiple extension cords, so I need to add more outlets. The sheet rock had been put flat on the back wall without any spacers and had been given a funky angle where the ceiling met the wall. New idea: put up a new wall in front of the outer back wall to get rid of that angle and to give me room for the electric. Plus I can add insulation against the back wall that nothing will want to build a nest in. 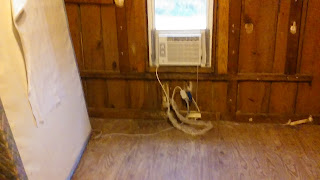 The last wall proved interesting. The window trim had been installed properly on top of the sheet rock, which surprised the hell out of me. I managed to get off without damaging it. The spacers behind the sheet rock turned out to be 2"x4"s. And there was this lizard creature that wasn't having any luck running away and hiding from my destruction of its hiding places. But I got it off before full dark. At this point the lack of interior insulation wasn't surprising me; the back bedroom and kitchen were never constructed with the same care as the rest of the house. See the visible gold between the pine boards? 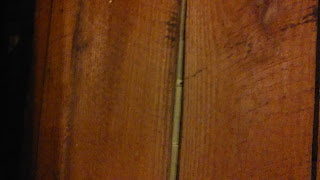 That is the back of the aluminum siding that covers my house. The exterior of a house is supposed to be wrapped in a vapor barrier or some kind of moisture protection. I was thinking tar paper, given how long the siding has been up. No such luck.

So insulation of some type all around the room is now added to the rehab project. Since I have a lot of weekends already planned with things that are not the rehab project, I'm guesstimating my finish time for the end of April. Depending on how much supplies cost.

Read Free!
The BookWorm
Posted by KLCtheBookWorm at 8:08 PM No comments:

This was the parade I got today when I left the house around noon. 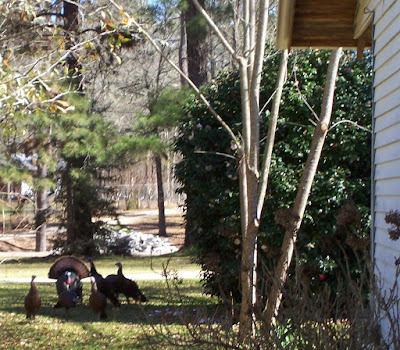 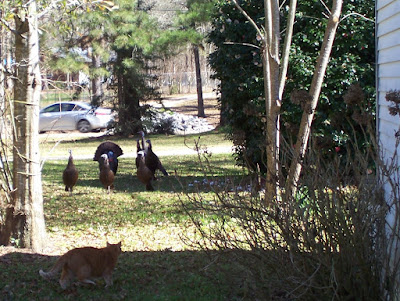 Our flock of wild turkeys! They nest in the creek bottom behind my house and have been coming up in our yards to eat grass or bugs in the grass. For those not familiar with these birds when they're alive, the tall lean ones are the hens and the tom is the one with the spreading tail feathers. And my cat Mustard stalking forward, the idiot. And then standoff in the third picture, which soon had four of the hens watching my cat. I finally got him away from them before bloodshed.

Read Free!
The BookWorm
Posted by KLCtheBookWorm at 12:35 PM No comments: